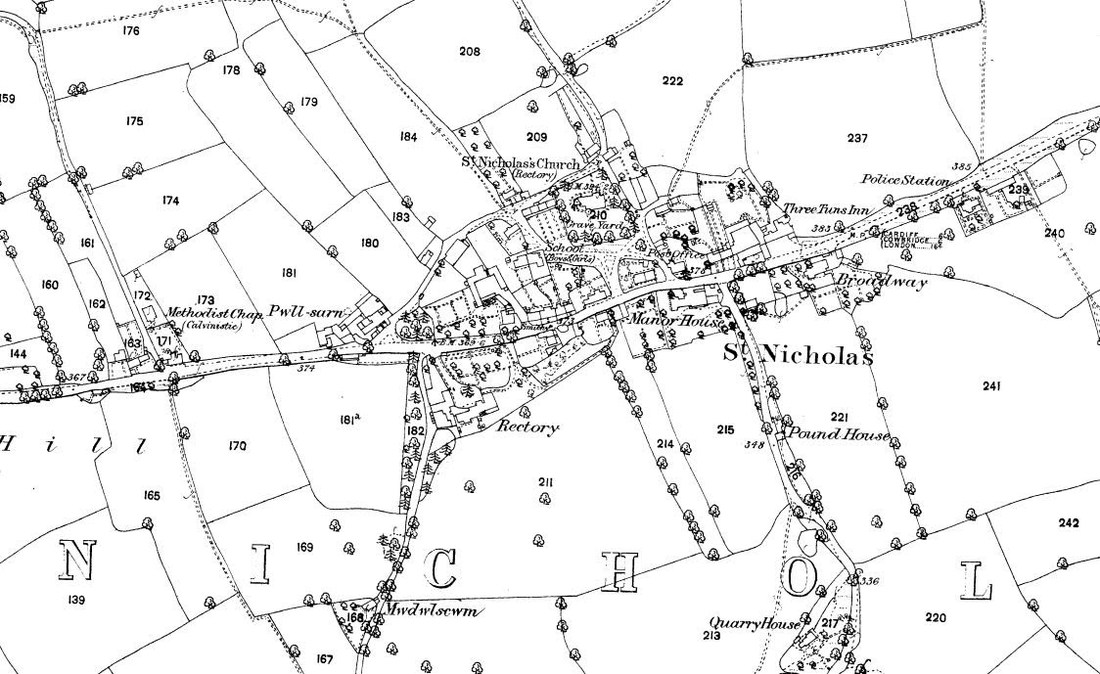 ​The village prospered as a farming community during this time, with the passing trade sustaining a number of inns. The Crown Inn, Prince's Arms, The Travellers Rest, and the Three Tuns were all clustered within the area of the church and manor. None exist now,  though The Three Tuns is converted to residential use and the Prince's Arms is Trehill House.

By the 19th century, the village had come to sustain a number of small industries, offering carpenters, millers, saddlers, wheelwrights and masons.  A smithy operated from the centre of the settlement and an agricultural implement factory, owned by W. T. Wright, was established on the site today occupied by the Laurels.  By the 1870s a purpose-built boys’ and girls’ school had been founded; lessons seem formerly to have been conducted in the adjacent cottage.  Further public buildings erected during the 19th century include the police station at the eastern end of the village.  This was originally provided with a court room, one of the first to be founded in Glamorgan.


The establishment of the Mission Room and Police Station, and the expansion of the school during this period marked the cultural and social development of the rural community.  The Cory family were particularly influential in this respect: closing the Three Tuns and opening the Coffee Tavern on the site of the former Travellers Rest.  The building is now known as Westways.  The Cory family of Dyffryn owned much of the land in the area in the 19th and early 20th centuries.

Between 1891 and 1893 a prestigious new home based on an earlier building, Dyffryn House, was built near to the village for John Cory, a well known local industrialist and philanthropist – the architect was E. A. Lansdowne of Newport.  There had been an Elizabethan house on the site, which lies to the south of St. Nicholas along Duffryn Lane, and this had been successively owned by the Button and Pryce families.

Dyffryn is now principally known for its gardens, laid out for Reginald Cory (John Cory’s son) by Thomas Mawson, the internationally known and prolific garden designer.  Work began in 1904 and was completed a year later.  After Reginald Cory’s death in 1937 the house was sold to Sir Cenydd Traherne who leased the property to the County Council.  It is currently vacant and the gardens are designated grade I on the ICOMOS/Cadw Register of Landscapes, Parks and Gardens of Special Interest in Wales.  Reminders of the links between the Cory family and St. Nicholas are still provided by their family tomb in the churchyard, by West House, built as a coffee house on the site of the Travellers’ Rest Inn, and by the church hall and accompanying church hall house on the main road, all of which were promoted by the Cory family.

On the whole, however, the changes brought to the village by the 19th century were relatively few: a comparison between the Tithe Map of 1838 and 1878

The Button family figure a lot in village history, most famously Admiral Thomas Button  who discovered Mansel Island in Hudson's Bay, Canada.
​The following newspaper story from the 1880's has been taken from the Llancarfan Society newsletter.

MURDEROUS ATTACK ON A FARMER AT ST NICHOLAS

​We regret to report a murderous assault upon Mr D. J. Jenkins, of Llancadle, who, after being seriously  maltreated  by  the  miscreants,  was  plundered.  Late  on  Saturday  night  the  wife  of Police-constable  Williams,  residing  at  the  Police  Station,  St  Nicholas,  was  aroused  by someone calling out from the outside for her husband to come out. On opening the door she saw a trap standing in the roadway, with a man inside who was obviously suffering serious injuries. On her going to the trap she found a young man who, in a very weak voice asked permission to enter, or to be taken somewhere, as he was dying. Her husband was at the time on duty and might not be home for several hours, and as she was alone she hesitated about taking him into her house. She then determined to take him to the Three Tuns, St Nicholas.

On arriving at the inn, the young man, who was very weak from loss of blood, was lifted out of  the  trap  and  carried  into  the  bar,  where  he  was  recognised  as  Mr  Jenkins,  farmer, of Llancadle,  and  son  of  Mr  Jenkins  of  Flemingstone-court,  both  gentlemen  occupying  very respectable positions and well known through the whole county. ......

While  at  the  Three  Tuns,  in  answer  to  some  questions  put  by  Mrs  Banner  [landlady],  Mr Jenkins was only able to answer that he had been attacked by some persons on the top of the hill near St Nicholas, called "Tumble Down Dick" and that he was beaten with a thick stick and robbed.

Mr Jenkins had attended Cardiff market on Saturday, and was returning home as usual. He had in his possession a gold watch and some £6 or £7 in gold, beside some silver, when he left the Royal Hotel stables at about 11 o'clock. These are all missing.

Mr Jenkins is reported to be a little improved but his sufferings are very great, and when able to bear it, will have to have a surgical operation, as portions of his face are greatly disfigured; indeed permanently injured.
Editorial note. I am indebted to John Cann for this Newspaper extract which, like the one on pages 3 and 4 he found amongst other documents in the David Jones’ (of Wallington) archive.

It is difficult to be sure but the style suggests origin from the same newspaper, possibly the Bridgend Chronicle which carried rather detailed reports from the villages in the Vale.

The cutting probably dates from the 1880's and the young Mr Jenkins of Llancadle is one and the the same as the   Mr. D. J. Jenkins, Llancadle,  who presided  over the ploughing  match dinner    at  the  Fox  and  Hounds  Inn  as  reported  on  p.  3  &  4.  Despite  the  injuries  and  the horriffic  thought  of  surgery  in  those  days,  he  obviously  recovered  to  take  up  a  position  of some eminence in Llancarfan parish.

Six or seven pounds in 1880 must have been a very substantial sum of money: farming in the Vale seems to have been a profitable enterprise.

“Tumbledown Dick” was the hill which we now call “The Tumble”, originally a much steeper lane,  following  a  route  to  the  south  of  the  modern  road.  Tumbledown  Dick  was  also  the mocking name given to Richard Cromwell, Oliver’s third son, in enjoyment of his political misfortunes. Does anyone know why his name should have been associated with the hill or was it originally “The Tumble”, picking up the “Dick” at the time of  Richard’s notoriety? 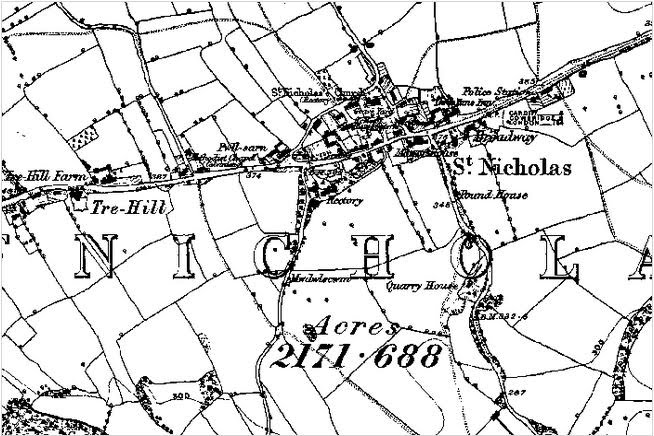 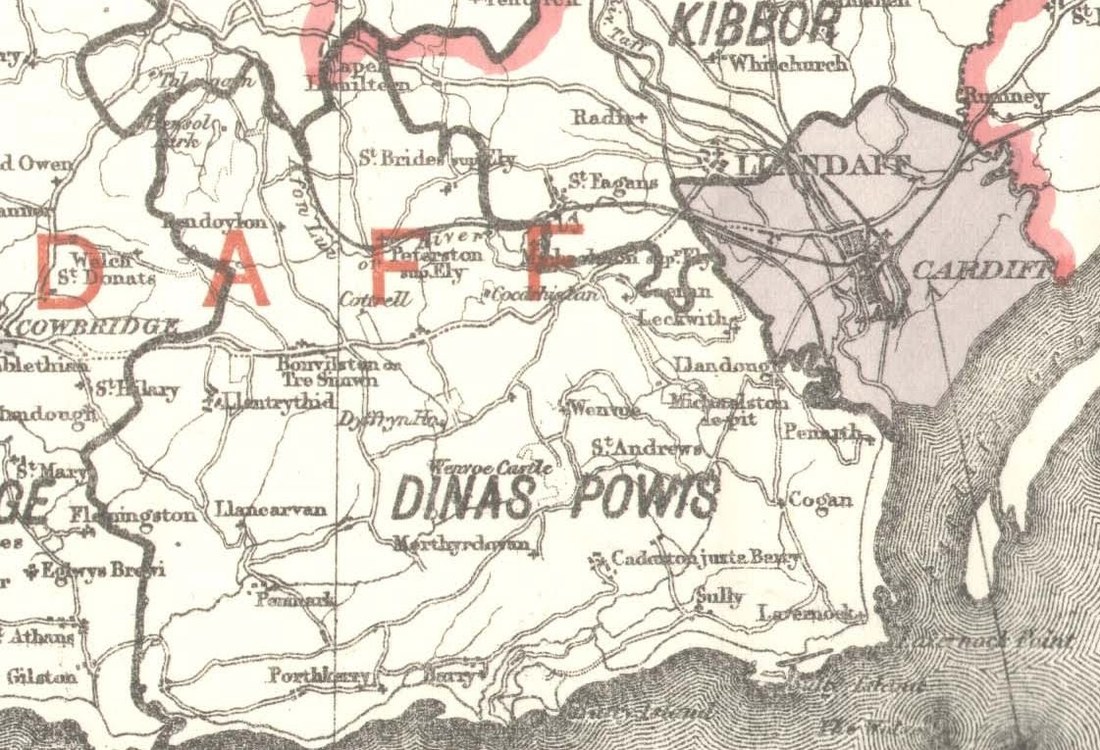 ​Source: Report of the Boundary Commissioners for England and Wales. 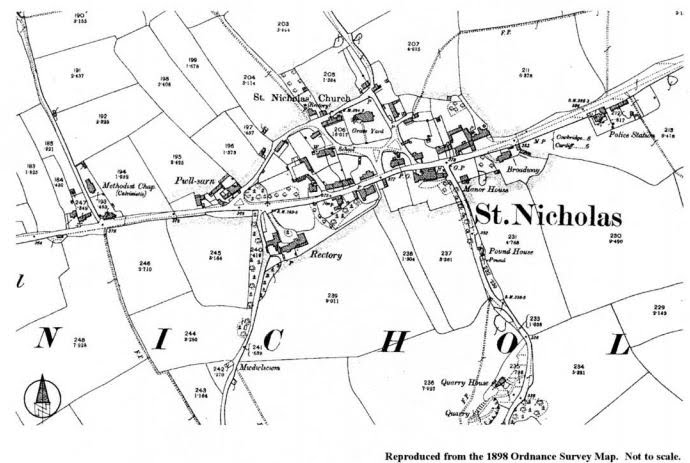